On the afternoon of Wednesday, 27th November, Merrow made the short trip to Leatherhead, where we played four rinks against Mole Valley IBC. It was a miserable, wet day, so an indoor match was just the ticket.

We were a player short, so were pleased that Mole Valley could loan us Fred at short notice. Fred turned out to be a godsend, being a very strong lead.

Merrow are still developing as a side, so it came as no surprise that we struggled to win ends. The exception was the team of Fred, Richard, Lorna, and David E, who played out of their skins to gain an impressive win. Unfortunately, the other three rinks weren’t able to overcome their opposition, and Mole Valley had a comfortable victory. Despite our defeat, we all had an enjoyable afternoon’s bowling with our friendly hosts.

We look forward to next year’s fixture, when we should be better able to take the game to Mole Valley.

Our next indoor match is at Camberley IBC on Sunday, 26th January. 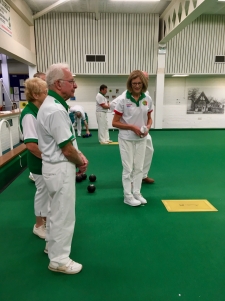 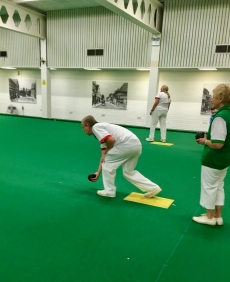 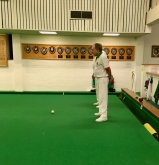 The club’s AGM was held on Monday, 11th November. This year, the AGM was held in the Village Hall’s Library, a first for us. It was good to see so many members attending on the night, taking part in the various discussions.

The committee presented their reports to the meeting, covering the following areas:

Then we went on to the election of officers, all of which were elected unopposed. A new post was introduced, that of Press Officer, which covers publicity and promotion of the club. Election results were as follows:

David Ewins will continue to run the Tuesday and Friday leagues, and John Wills the  Thursday league.

Both resolutions were discussed by those present, and passed by a show of hands.

The meeting closed, with some members retiring to the Village Club for a drink and a game of snooker, which generated a lot of laughs.

Don’t forget the club AGM on Monday, 11th November. We meet at 7:30 in the Village Hall’s Library, as there are some noisy events in the Village Club.

Do come along, vote on resolutions, and hear what your committee has to say.