Our annual match between teams representing the club’s President and Chairman was held on Saturday, 27th July. Despite early rain, we were fortunate to have a dry afternoon for the match.

To help us celebrate 90 years as a bowls club, four past members were invited to join us for the match: Rodney Morrison, Tony Cekŷs, Mike Jordan, and Sue Chitty. Sadly, neither the President nor Chairman were able to bowl, due to health reasons but watched the match from the sidelines.

We played three rinks of triples, and one rink of pairs. Due to the threat of rain, the triples played sixteen ends, while the pairs played eighteen ends. All rinks played well, with close scoring all the way, and lots of groans when bowls just missed their target. There was also plenty of laughter.

At close of play, the scores favoured the President’s teams, winning 59-53, with each side winning on two rinks. The top team were Judy, Mike, and David F, playing for the President, with a winning score of 16-10. Scores aside, a great afternoon’s bowling was enjoyed by all.

Following the match, Chairman Brian presented President David with the Bob Ashdown Memorial Shield, after which we all enjoyed some well deserved refreshments, including a wonderful anniversary cake made especially for the occasion by Debbie. A fitting end to a great afternoon. 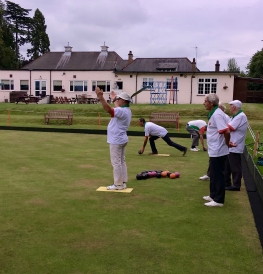 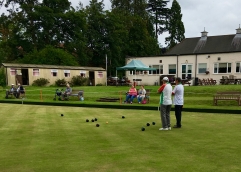 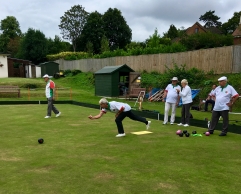 On Sunday, 14th July, Merrow hosted Westfield for a match of four triples. After the heat of recent days, it was nice to have a cooler day for our match.

Westfield are a strong side and, true to form, Merrow were soon under pressure. It soon became apparent that, unless we made a remarkable tecovery, Westfield were going to win the match. However, Merrow never give up, and continued to fight hard. A break for tea was welcomed by both sides. Our thanks to John and Sally for the refreshments.

After the break, Westfield continued to extend their lead, finally winning the match 49-81.

Two of Merrow’s rinks acquitted themselves well, drawing on one and only losing by a small margin on the other. Well done to Judy, Andy, and Ken, fighting back to draw 15-15; and to Mark, Bernard, and Bob, only losing 12-15.

Despite losing the match, we all enjoyed a nice afternoon playing bowls in good company.

Jarek has the shot bowl for Merrow

Merrow have the shot bowl 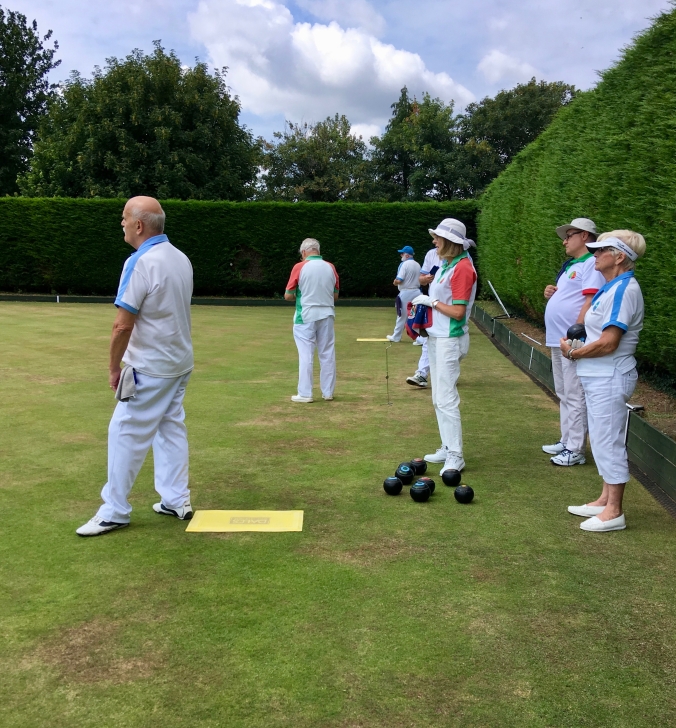 Rinks 1 & 2 under way with Sheila and Jarek

As has been the norm of late, it was hot and sunny, with just the occasional bit of cloud coming over.

All rinks started well, with Merrow putting up a good showing. On the captains’ rink, Merrow was starting to drop behind at the break, so we were glad of some tea and a chance to regroup. Thanks go to Debbie, Lorna, and Sally for making lovely cakes, and Lesley and Sophie for helping out.

Following the restart, Stoke Park started to move ahead on two rinks, while Merrow held their own on the other two. At the finish, each side had won two rinks but Stoke Park won on overall points, with a score of 57-70.

Next up is a home match against Holloway Hill on Wednesday. If you haven’t put your name down, best do so ASAP. 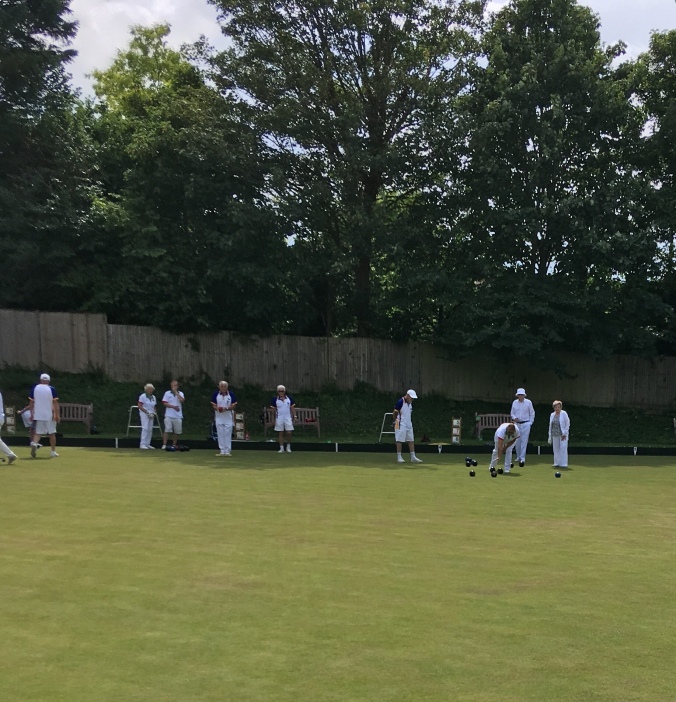 For our match on Wednesday, 3rd July, we played host to Mayford Hall for a friendly of four triples.

Once again, we were blessed with a lovely hot, sunny afternoon, made more bearable by a light breeze.

Our captain Brian was unable to play due to a hand injury, so he just had to get the match started. Once the match got under way, Merrow’s bowlers started to take control, with all rinks playing strongly.

There was a welcome break for tea at the halfway mark, with a delicious selection of cakes made by Lorna. It’s always a treat to sit out in the sunshine with a cup of tea!

After tea the match resumed. Fortunately, the break had not affected Merrow’s performance, and we had a great result, winning on three rinks, and losing narrowly on the fourth, with a final score of 74-55. Our top rink was Jarek, Andy, and John with a tremendous score of 23-9. Well done to them, and all the other rinks. 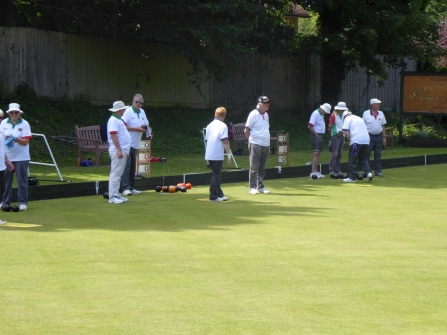 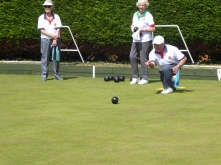 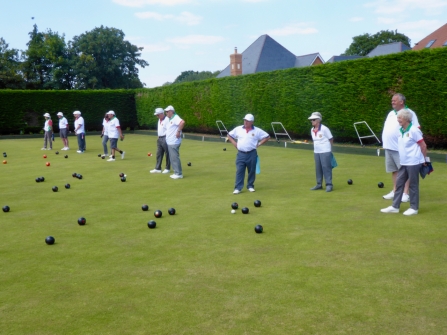 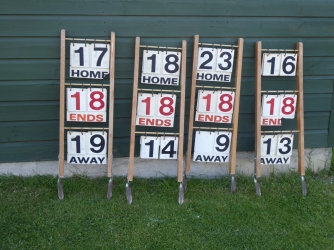 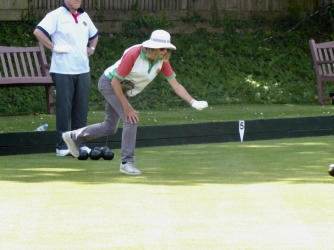