On Saturday, 24th August, Merrow hosted the return match of our local derby with Burpham. It was a hot and sunny afternoon, with the benefit of a light breeze, and we were all thankful for the shade offered at one end of the green.

We were to play four triples over eighteen ends. The match was soon underway, with both teams fighting hard for every point. However, fortunes were mixed with Burpham leading on three rinks when we stopped for tea at the halfway mark.

We did not have a volunteer to handle the teas, so several players joined forces to provide the repast. Our thanks go to Joan, Lesley, Debbie, and Lorna for all their efforts, and the lovely cakes.

After the break, Merrow came out reinvigorated, and the fight back began. Unfortunately, one Merrow player was suffering badly with the heat, so David E kindly stepped in as substitute.

After a most enjoyable afternoon’s bowling, honours were even at two rinks each. However, the overall score favoured Merrow, who won 61-58. Well done team. Our top rink was Sue (retired), David E, Lorna, and Richard, winning 24-10. A special mention to our second rink of Mark, Brian, and Ken, who fought hard to win 14-12. The remaining two rinks also fought back to limit their losses, so well done to them.

We look forward to our next match against Burpham, which is on Sunday, 16th February 2020 at Wey Valley. 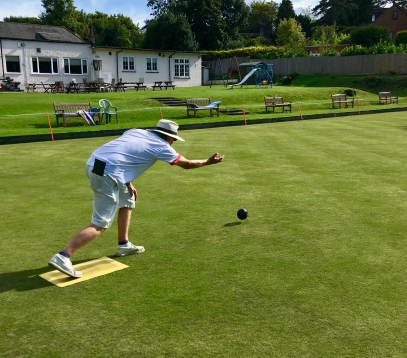 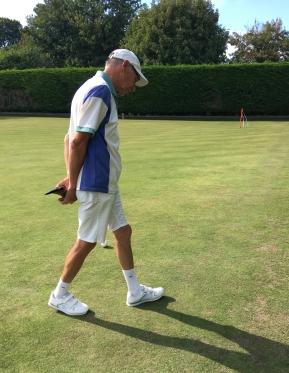 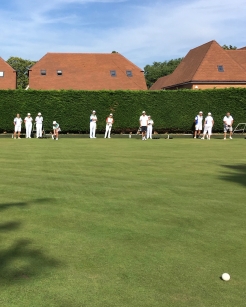 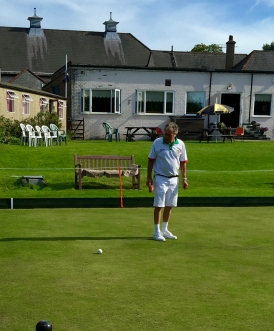 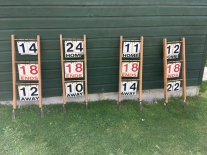